What if I have more questions? Expand

You can contact us here and we will get back to you as soon as possible. We are located in Florida so if you contact us after hours expect a little delay.

Additionally, at the bottom of each page is the Contact Us link.

We are working hard to improve the Help Section so please let us know if you have any other questions or concerns that need to be addressed.

Do you have trade data with specific company names? Expand

No, we do not have company names.

Currently, our data is about specific exports/imports ( commodities ) from/to U.S. ports with foreign trade partners. For instance, if you are looking for exports of cotton from the Port of Los Angeles. We have it. You can drill down further and find which countries the Port of Los Angeles trades cotton with during a specific date range.

What is the source of your data? Expand

How current is your data? Expand

Census releases its data about 40 days after the end of the month. Our data is updated within 12 hours of its release.

Can I view this data on multiple platforms? Expand

Yes. Once you are a subscriber, you will have access to the data anytime, anywhere or any device.

How many years of data do you have? Expand

We currently have annual data going back to 2011 and monthly data from 2013 but our database is growing monthly and other datasets will be added over time.

What is a data set? Expand

A data set is either one country, one port (airport, seaport, or border crossing), one import or one export commodity.

How do I find specific data? Expand

What’s the best way to find a specific export or import product? Expand

You can search by four-digit harmonized tariff code or commodity name in our glossary here.

How are commodities classified? Expand

We use the Harmonized Tariff code for all commodities. The data we provide is at the four-digit level.

You have to go all the way to the 10-digit level to break some commodities down to, say, kerosene -- and the port-level data you like only goes to six digits.

It is the Customs district data that goes to 10 digit. Here, we can help you but it would be a manual process, let us know what kind of data you are looking for, happy to review options.

Is your tonnage data based on short tons or metric tons? Expand

The tonnage data available is in kilograms, so metric "tonnes" is actually correct.

Do you have more information about the subscription options? Expand

Sure. Visit our Product and Services page here.

In addition to finding the data at the page I clicked on, what are the other benefits? Expand

USTradeNumbers.com offers data for more than 450 U.S. airports, seaport and border crossings. So, for any one of those “ports,” you can see a wide array of data. 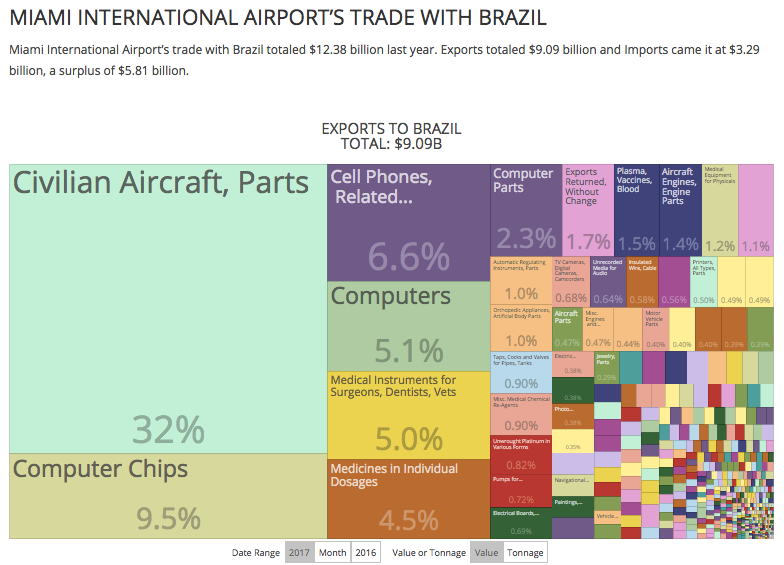 We also offers data for more than 225 countries. For any of these countries, there is equally rich and deep data available.

How much data does a subscriber have access to? Expand

For Basic and Premium subscribers, we make monthly data available in the current year, as well as year-to-date data and annual data for the previous year. For Basic Plus and Premium Plus subscriptions, which include Excel
downloads, we make up to eight years of data available. Contact us if your needs exceed that at [email protected]

Can I cancel my subscription? Expand

All subscription sales are final.

Can I upgrade my subscription? Expand

Yes, though you will need to contact us to upgrade within a specific subscription. You can add additional airports, seaports, border crossings, countries, exports or imports.

What if I need to follow more than one seaport, country or export? Expand

Contact us at [email protected] and we can discuss our discount packages.

No. While our payments go through PayPal, you can also use any Visa, MasterCard or American Express card. In addition, you can pay by check, though that will delay your access to the data.

What can you tell me about WorldCity? Expand

WorldCity, founded in 1998 by President Ken Roberts, has been producing annual TradeNumbers publications for a wide variety of communities since launching Miami TradeNumbers in 2001. It has produced TradeNumbers for many of the nation’s leading Customs districts, ports, border crossings and countries, including Los Angeles, Seattle, Dallas-Fort Worth, Houston, New Orleans, New York, George, China, South Korea, Mexico, Perishables and numerous others.

It has been publishing trade data at woocommerce-189213-560374.cloudwaysapps.com for more than a decade.

In addition, Mr. Roberts is a regular speaker nationally, is a regular contributor at Forbes.com on trade, and is a two-term member of a dozen members of the Federal Reserve’s Trade and Transportation Advisory Board.